The US Senate on July 27 passed a bill to subsidize the semiconductor industry, hoping to allow US companies to compete with China and alleviate the recurring chip shortage that has plagued many sectors, such as the automotive industry. The bill provides for 52 billion dollars for the revival of the production of semiconductors in the United States, a text which must still be approved by the House of Representatives.

These amounts are included in a broader law, which also allocates more than 100 billion dollars over five years for research and development. 64 out of 100 senators, Democrats and Republicans, voted for the Act and science chips. The Senate passed historic legislation that will cut costs and create jobs, immediately how President Joe Biden called on House officials to vote on the law quickly.

Demand for semiconductors, the heart of all modern electronics, exploded during the pandemic, causing global shortages further exacerbated by the closure of Chinese factories in the face of Covid resurgences. The supply problems for these chips, present in both smartphones and helicopters, have, according to the government of Joe Biden, fueled galloping inflation in the country.

In particular, they slowed down the production of new cars last year, causing prices to soar in the automobile industry. The dependence of the United States on factories mainly located in Asia also poses a threat to national security, with many military equipment operating using these chips, the government notes. 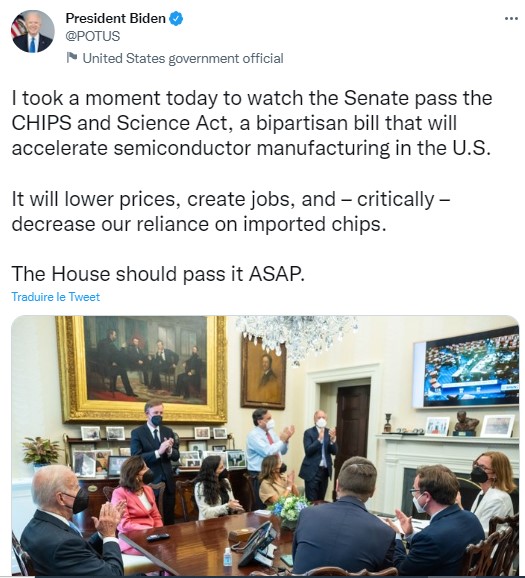 Despite a statement shared by Democrats and Republicans on the imperative to revive national production, the elected representatives of Congress have failed for months to agree on a final text. As far as microprocessors are concerned, the bill ultimately provides for $39 billion in aid to encourage companies to produce locally, and $13 billion for research laboratories.

Several manufacturers have already indicated that they will use these funds to build factories in Ohio or Indiana. Senator Bernie Sanders, a figure of the American left, was moved before the vote on the sums allocated to profitable companies which, according to him, have closed 780 factories in 20 years in the United States. It’s a bribe to keep them here,” he wrote in a statement.

President Biden, however, promised on July 25 that the law was not a “blank check”. According to him, companies will have to meet certain conditions, particularly in terms of wages, to receive this public aid. We will not allow them to use these funds to buy back shares or pay dividends, he added, specifying that he would give the green light himself to the largest amounts.

After years of hard work, the Senate is embracing the biggest investment in science, technology and advanced manufacturing in decades, Senate Majority Leader Chuck Schumer said Wednesday. This flea and science bill will create millions of well-paying jobs in the future. It will streamline supply chains, help reduce costs, and protect America’s national security interests.

Too often our government and businesses are accused of being too short-term,” he continued. But this is one of the most important long term bills we have passed in a very long time. I told our caucus yesterday that our grandchildren will be in well-paying jobs in industries we can’t even imagine because of what we’re doing now. And we did it together, both sides cooperating in good faith on some really tough issues.

The American people deserve to see more examples like this, where both sides come together to do very, very big things that will have a lasting impact on our country,” Schumer added. And I am confident that future generations will remember the passage of this bill as a turning point in American leadership in the 21st century.

In his first appearance since taking over as Intel CEO in February, Intel CEO Pat Gelsinger predicted that semiconductors will make up more than 20 percent of the total premium vehicle BOM by 2030. a growth rate five times higher than the 4% figure for 2019. So far, only a handful of companies have succeeded in integrating the technologies necessary to etch ever smaller elements in silicon, and the mastery of lithography in the extreme ultraviolet (EUV) by TSMC helped catapult it to the front of the pack.

In July 2021, Intel released its roadmap for the next four years. During its presentation, Intel announced that it will produce chips based on the 7nm, 4nm and 3nm process nodes over the next four years. In addition, from 2024, the company will introduce its new chip manufacturing technology, the Intel 20A (i.e. 20 Angstroms) process node, which should allow it to catch up and regain a lead on its two most big rivals TSMC and Samsung Semiconductor. Intel is also opening up its foundries to other chipmakers, including Qualcomm, which currently dominates the mobile phone chip market.

According to a certain source, Intel wanted to manufacture silicon wafers in a factory located in Chengdu, China, by the end of this year. However, when the company recently shared details of the plan with the US government, Biden administration officials strongly discouraged the move. The report does not specify the exact nature of the White House’s security concerns.

Intel has also reportedly sought federal assistance to accelerate research and production in the United States, with Intel adding in a statement that Intel and the Biden administration share a goal of addressing the current industry-wide microchip shortage. and we have explored a number of approaches with the US government.

We are focused on the ongoing significant expansion of our existing semiconductor manufacturing operations and our plans to invest tens of billions of dollars in new wafer fabs in the US and Europe. If there’s a concrete truck in the state of Ohio that won’t be working for me next year, I want to know,” joked Pat Gelsinger.

Chipmaker Intel will spend at least $20 billion on a new New Albany chip manufacturing site near Columbus, Ohio, the company said. The 1,000-acre site will initially host two chip fabs and is expected to directly employ at least 3,000 people and tens of thousands more among suppliers and partners. Construction should start this year and the site should be operational in 2025.

“We aim to invest up to $100 billion over the next decade, but without federal government support, that goal will be difficult to achieve in that time frame,” confirmed Intel spokesman William Moss. . The initial investment of $20 billion does not, however, depend on federal grants.

Intel’s other promises are more hazy, such as the idea that the Ohio site could house eight fabs instead of just two. If fully built, the total investment at the site could reach $100 billion over the next decade, making it one of the largest semiconductor manufacturing sites in the world. in Intel’s press release. But it’s not a firm commitment, it’s an ambitious goal, provided Intel gets federal grants.

US President Joe Biden congratulated Pat Gelsinger after announcing $20 billion in investment for two new chip manufacturing facilities, or fabs, the company will build just west of Columbus, Ohio. Now that the Senate has passed a $280 billion bill to boost computer chip production in the United States, let’s wait and see if all the concrete trucks in the state of Ohio will be working for Pat Gelsinger this year. next.

What is your opinion on the subject?

What do you think of the adoption of this bill?

Joe Biden calls on Congress to pass the CHIPS Act, legislation that would provide $52 billion in subsidies, to advance US semiconductor manufacturing

Intel, Nvidia and TSMC executives estimate chip shortages could last well into 2023 as the industry scrambles to quickly bridge this crisis to the past